This past Mother’s Day weekend, Americans from many states and backgrounds assembled on Capitol Hill in Washington, D.C. to learn, confer, inform, and advocate about ALS. The 2018 National ALS Advocacy Conference is a two-day event that features panels and presentations by researchers, organizers, and ALS patients, followed by meetings with congressional members.

While the ultimate goal for these advocates is to discover a cure for ALS and make the disease a mere memory, they also work tirelessly to ensure ALS patients and their caregivers have access to all the resources and services necessary to lessen the horror of living with ALS.

Among the ranks of ALS advocates storming the hill was Massachusetts chapter member Maria Comery. A multi-time conference attendee and previously an ALS caregiver, Comery was kind enough to sit down with SimpliHere and reflect upon #ALSHillDay18. 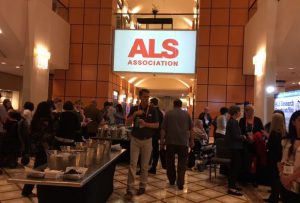 SH: Hi, Maria. Thanks for sitting down with us today.

SH: You attended the 2018 National ALS Advocacy Conference in Washington, D.C. How was it?

MC: As usual, it was great. I think there were over 500 participants and a number of ALS patients, who we refer to as PALS [People with ALS], and their caregivers. Is is always great to see people come back to [the conference], if they can attend. It can be difficult for someone who has ALS to attend, depending on their disease progression. We’re heartened and grateful that they can travel to the meeting because they show what it’s like to live with ALS. It was moving. It was inspiring.

SH: So, this wasn’t your first time attending the conference.

SH: What inspired you to attend that first conference?

MC: I was aware of the ALS Association Massachusetts Chapter because the chapter had provided assistance and resources for my mother, who was diagnosed with ALS in 2012. When she passed on in March 2014, it was a really difficult time for me. When the chapter suggested I attend the meeting, I thought that it would be personally good for me to go and better understand this disease and how it impacts what currently seems like a really random group of people, and see if there’s any way I can help, because as you know there is no cure for ALS.

SH: When you started attending the conference in 2014, did you make the conscious decision that you would be an annual participant, or have you decided each year to attend again?

MC: With each meeting that I attend, I feel even more strongly that I should be part of the voice on Capitol Hill. We need to keep creating awareness and reminding our elected representatives of this disease that takes such a toll on individuals and families across many different socioeconomic groups and ages. It’s something that I feel is unfinished business, and as long as I can participate and contribute in some way, I’ll make every attempt to attend the meeting.

SH: For some people, it’s a lot easier to write a check than to donate time and effort. Is there anything in particular that pushes you to be more hands-on in your activity within the ALS advocacy community?

MC: At this point my involvement is through the Advocacy Conference. I’d like to expand my involvement to be engaged with some of the ongoing events through the Massachusetts chapter. There are ALS walks and other events that raise awareness and necessary funds. There’s more that I can do. The conference is a gathering place for everything ALS. But once a year is not enough. This has to really be an ongoing activity and work to advance the cause. So I’d like to do more in that regard. But the conference is a great place for education, a great place to meet your representatives, and to push the cause for the people who don’t have a voice.

SH: When you attend the conference, what are your goals going in? What are you aiming to achieve and come away with?

MC: The advocacy conference is a chance to come together, number one. Every year there are priorities, and we go to Washington to state those priorities. We have what we call legislative asks. This year’s legislative asks were centered around co-sponsoring the ALS Disability Insurance Access Act, making sure that there was a certain amount of money for the ALS registry at the Center for Disease Control and Prevention, making sure there was continued funding for the Department of Defense ALS research program, and also making sure that there was money allocated for the National Institute of Health. The legislative asks vary from year to year. We always reinforce funding for NIH, CDC, and DOD, but there are sometimes other legislative asks that have to do with Medicaid, Disability Insurance, and other appropriations. We try to make sure that we make the most of those meetings and create a powerful message.

SH: Is there anything you can share about the next steps after the conference every year, and how advocates take the information and discussions shared at the conference and turn that into realistic action to continue the movement?

MC: A take away from this meeting is, “what can you do at the local level?” Because there are going to be more people with new diagnoses of ALS. So it’s important to learn what resources are available for patients. The chapter provides services for patients and their caregivers, and education. That’s important. Finding a cure is ultimately what we want to happen, as well as finding therapies that make a difference in the quality of life. We try to balance all those things through local action and on the national level.

SH: For this conference, did you have any moments that are really sticking with you?

MC: I think at every conference there is something that stands out either by a group or an individual. One of our legislative asks had to do with the ALS Disability Insurance Access Act. That’s to wave the 5-month waiting period for patients who have ALS before they can start getting benefits under social security disability. If you’re diagnosed with ALS, there’s no real reason why you should wait before your benefits kick in. And I think with other diseases or illnesses, the reason that waiting period is put into place is to prevent fraud or see if your condition is going to improve. With ALS that’s not going to happen. You can be diagnosed with ALS and by month seven it can kill you. For you to have paid into the social security system and not be able to take advantage of disability benefits and access those resources creates a real financial hardship.

But there was a woman who stood up [at the conference]. Many people in her family had had ALS. I’ve lost count of how many people in her family had ALS. She just asked the question, “Why 5 months? This number is so arbitrary. It doesn’t make sense.” I think she put it so plainly and so directly that it struck a chord in everybody in the audience. And sometimes you just want to speak plainly. Why? Why can’t it be this? I don’t think five months is a meaningful number. But when people who are caregivers or family members – people like us – say it like it is, those are the people that you want to listen to, and their voice carries a lot farther sometimes that you would imagine.

SH: Can you speak to the personal impacts someone considering participating in the conference can expect?

MC: What you see year to year is the cross-section of people who are affected by this disease. You sometimes see PALS returning to the conference and you notice changes. When you first met them they were managing their disease in a certain way, and you always want to see them again and not have them get worse. But it doesn’t happen that way. While I’m happy to see everyone, it’s sad to me that their condition is worsening.

I would say to the person considering going, is to go to see how collectively how loud we can be as a group to increase awareness and move towards a cure for ALS. Meet the PALS and their caregivers. Attend as part of your chapter but reach out to the other chapter advocates. We have so much in common. You get a lot of inspiration, and you feel a lot of emotion, and all those things will work in your favor to move things along.

As we wrap up our conversation, Comery reiterates that ALS — also known as Lou Gehrig’s Disease —  can affect anyone. “You read about famous people who have ALS. Stephen Hawking, Sam Shepard, and other famous individuals. [At the conference] you meet a lot of other people with ALS who don’t have famous names. We need to bring their names to the attention of our elected officials and the community. They’re the bravest people that you could ever meet.”

To join the movement to defeat ALS and provide care for PALS and their caregivers, find a local ALS Association chapter or register next year for the 2019 National ALS Advocacy Conference.